“When you look into the abyss, the abyss also looks into you,” Nietzsche. 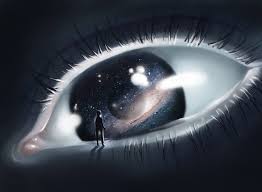 Nietzsche’s aphorism has a profound truth that is now being investigated by the scientific community.  It also has important ramifications for those doing any type of chi cultivation method. From a scientific viewpoint, the term “abyss” is interchangeable with that of an “experiment” or “system”; that which is being “observed”.

Recently, the scientific community has come to understand that the observer of an experiment/system of study is not impartial; the observer, in the act of observing, is actually part of the experiment and his/her expectations actually influence the outcome of the experiment.  [For a more detailed explanation of this phenomenon, see any book or web resource on the dual behavior of light waves/particles or theories in quantum mechanics].

This interplay, a form of “quantum entanglement” (a term coined by Dean Radin), happens not only at the sub-atomic level, but bubbles-up into large-scale happenings of our material world.  For example, the tried-and-true practice of visualizing success, from high performance in sporting contests to job interviews to academic achievement, has shown to have favorable outcomes.  The act of desiring the outcome of a situation (system/experiment) actually influences the outcome of said events on some level; the goal, then, of a chi student, is to develop one’s own abilities to gain a greater sphere of influence in his/her life.

Which leads to a very important concept for an individual involved in chi development: the nature of the abyss.

As quantum mechanics has shown, everything is interrelated on [at the very least] a sub-atomic level.  With that being the case, any inquiry, investigation, or observation into a “system” results in that same system becoming directly involved with the observer.

The implications are both many as well as deep.

Psi related abilities, such as clairvoyance, ESP, telepathy, which were once upon a time viewed as an outsider looking in are now seen more along the lines of an outsider joining the observation; upon joining the observation, the individual with said psi capabilities has introduced him/herself to those involved and shared a discourse.  The sensitivity of those involved and the skill to which the chi practitioner uses his/her techniques determines the size of the footprint left behind.  This is all to say: When a chi practitioner performs telepathy, telepathy is performed unto the chi practitioner”.

Please do not gloss over this concept; think long and hard as to what this really means and more importantly, to where this may lead.

Don Brown [certified instructor] for the School of Chi Energy